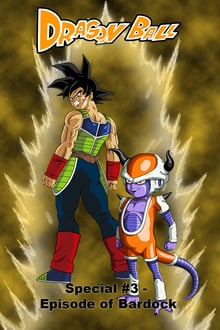 The story starts where the TV special leaves off, with Bardock fighting against Frieza, in an attempt to save his home, Planet Vegeta. He fails, as Freeza destroys the planet, killing all Saiyans on it – seemingly including Bardock. However, somehow he survives the blast and wakes up in a little village house. A purple-colored creature enters the room and introduces himself as Ipana. He also tells Bardock that he is on the Planet Plant  which – as the confused Bardock recalls – was the former name of Planet Vegeta. Suddenly the village is attacked by henchmen of the pirate Chilled, whom Bardock easily defeats, earning him the gratitude of the villagers. He ignores their thanks and states that he doesn’t care if they lived or died and flies away into a nearby cave to recover. Doctor Ipana’s son Berry comes and brings him food. At first he yells him to go away, but soon they form somewhat of a friendship as Berry keeps bringing him food.