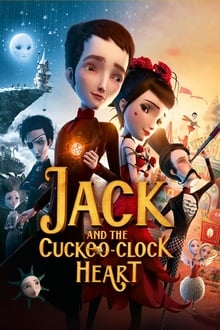 IMDB Rating: 7.0
Duration:  1h 34min
Genre:  Animation, Adventure, Drama
Release Date: 5 February 2014 (France)
Director: Stéphane Berla, Mathias Malzieu
Film Stars: Mathias Malzieu, Olivia Ruiz, Grand Corps Malade
Language: Hindi + English
Subtitle: English
Quality/Size: Bluray 480p [305MB] | 720p [674MB]
Format: MKV
Movie Plot: A 19th-century drama about a man whose heart was replaced with a clock when he was born. The situation dictates that he should avoid feeling strong emotions — love, most of all — but he just can’t keep his feelings under wraps. In Edinburgh, Scotland 1874, Jack is born on the coldest day ever. Due to the extreme cold he is born with a frozen heart which will not beat. The attendant midwife Madeleine saves his life by replacing his heart with a fragile but working cuckoo clock. She then advises him of three rules to prevent his untimely death: he must never play with the hands of the clock, lose his temper, or fall in love. Jack’s mother, for reasons known only to her, quickly decides her child would be better raised by Madeleine and departs, leaving Jack. Madeleine, incapable of bearing children of her own, raises and loves him as her own.