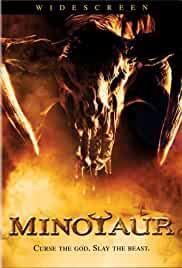 IMDB Rating: 3.6/10
Duration:  1h 33min
Genre: Action, Adventure, Fantasy
Release Date: 11 May 2006 (Russia)
Director: Jonathan English
Film Stars: Tom Hardy, Michelle Van Der Water, Tony Todd
Language: Hindi + English
Subtitle: English
Quality/Size: Bluray 480p [283MB] | 720p [679MB]
Format: MKV
Movie Plot:In the age of gods and spirits, the world was ruled by a dark empire from a palace on the Island of Minus. The locals worshipped the Bull, and the ambitious Queen got pregnant by their god, generating an offspring that was part human and part bull. When the Prince is killed on the island, the dwellers blame the villagers, and they are sentenced to give eight young women per year to satisfy the Minotaur. The shepherd Theo (Tom Hardy), son of the village leader Cyrnan (Rutger Hauer), misses his girlfriend that was abducted a couple of years ago. When he meets a leper seer, she tells him that his beloved Ffion (Donata Janietz) is alive, and that Theo must go to the island to kill the beast and save his love. Theo goes to the palace and faces King Deucalion (Tony Todd) and the Minotaur, supported by Deucalion’s sister, Queen Raphaella (Michelle Van Der Water), who discloses the truth about the Minotaur.