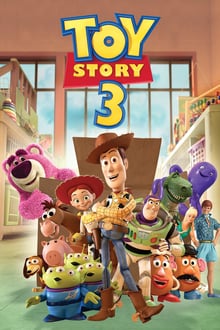 17-year-old Andy is preparing to go to college. He has not played with his toys in years, and most of them are gone, except for Woody, Buzz Lightyear, Jessie, Bullseye, Rex, Slinky, Hamm, Mr. and Mrs. Potato Head, the Aliens, and three army men. The despondent toys reflect on their future, and the army men leave by parachuting out the window. Andy intends to take Woody with him to college and puts the other toys in a trash bag to put them in the attic; however, Andy’s mother thinks the bag is trash and mistakenly throws it out. The toys escape and climb into her car, as they are upset and believe Andy tossed them away, and get into a donation box with Molly’s old Barbie doll, bound for Sunnyside Daycare. Woody follows but is unable to convince them that Andy meant to keep them, and is forced to go along when Andy’s mother drives off to donate them.